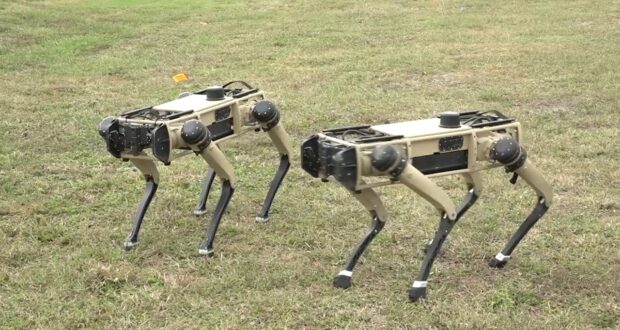 AFIMSC’s Tyndall Program Management Office recently unveiled the first of several cutting-edge technologies that will form the Installation of the Future in the area of base security and defense. The PMO, along with 325th Fighter Wing leadership, showcased Vision 60 Quadrupedal unmanned Ground Vehicles to augment security forces squadron Defenders during a demonstration Nov. 10. The Ghost Robotics Q-UGVs aren’t what most people would think of … They are “robot dogs.” Using onboard computers, cameras, and other detection devices, the electronic canines can scout for threats before human exposure to potential dangers or to allow human Defenders to take care of more pressing matters. Three Q-UGV robotic dogs are expected to arrive at the Florida base shortly to be incorporated in 325th Security Forces Squadron operations to enhance perimeter defense and installation safety, better equipping Airmen to execute the mission today and in the future.

More images at this link