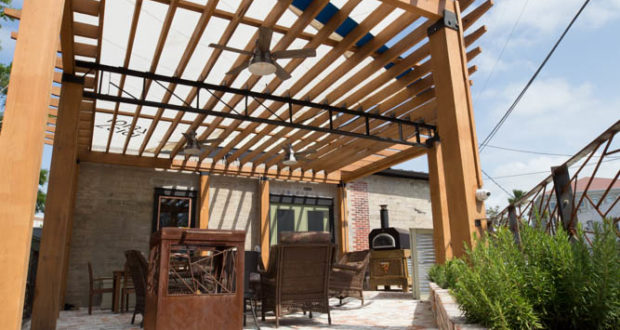 Allan Branch stands over a toilet with blue LEDs in the bowl, reciting lines from a poem on the wall of a half-bath in his brand-new home (it’s kind of romantic). “If you can keep your head,” he says, “when all about you are losing theirs and blaming it on you […] you’ll be a Man…”

Allan once knew all thirty-two lines by heart. His mom made him memorize them as a kid. “Those words ring in my head whenever stress gets high,” he tells me. He’s giving me the tour of his family’s brand new, 4,400 square foot warehouse turned “warehome” near McKenzie Park in Downtown Panama City. The last fourteen months have had their challenges, he says. That’s how long it took Allan, Anna and their two kids, Jimmy and Sarah, to turn a mangled, eighty-year-old auto garage in the heart of downtown into a sleek and smart dream home. 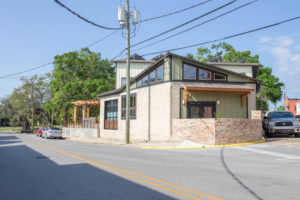 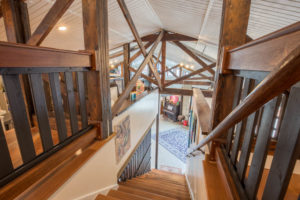 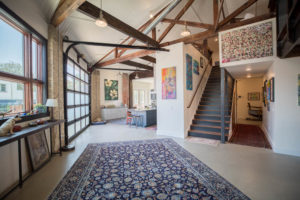 Innovative design elements are the main event in this two-story, open-air, green energy unicorn (the construction of which is part of a YouTube miniseries entitled: “Our Little Warehome”). The outside of the house showcases a bevy of eye-catching features, including angular architecture, rooftop solar panels and a back porch pergola made from a single log of 125-year-old sinker cypress. “When you get a group out on the back porch,” Allan says, “especially cooking pizzas (in the outdoor pizza oven), people pull up and be like, ‘What kind of restaurant is this?!’ The kids call them ‘slow-rollers.’” And for good reason. Catch a glimpse of the house while the massive hanger door is rolled up and you can see straight to the second-floor catwalk. Other indoor features include a 48-square-foot granite countertop island, smart appliances, 19-foot ceilings, space-saving cabinets, corridor closets and taller-than-average bathroom counters for Allan (who is 6’4”). There’s even an industrial-style urinal! Additionally, the home has its own “maker space” for projects and an upstairs office loft.

It’s a modern urban manor but, for Allan and family, it’s about more than an open floor plan or nifty contraptions like power outlets that pop up from the countertop. “This is the only time we’ve ever lived in a place that felt like a community. In our old neighborhood, no one spoke to each other. Here you stop and see people and talk about what’s next. And that’s how you define a community—people who have a common goal.” So, what exactly do the Branches do downtown? “We definitely eat out here,” Allan says. “We walk a lot more,” adds Anna. “In our other home, I’d never suggest we go for a walk after dinner because of cars whizzing by. Here, we walk to the marina or Massalina Bayou. Grab dessert at Ferrucci or beer from Wine Dog. You hear people talk about walkability, living downtown, but to experience it is kind of fun.” 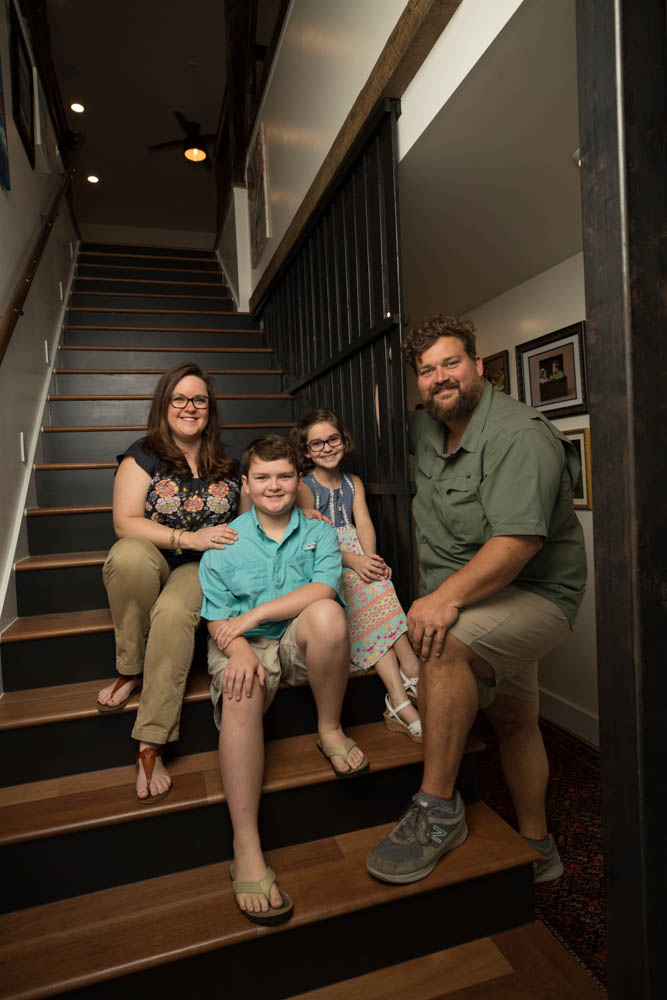 In addition to being in the middle of Downtown Panama City’s art/music scene and surprisingly vibrant nightlife, the Branch family discovers new ways to engage with the area together. They say it’s even more kid-friendly than your typical neighborhood. “We’ve got movies in the park on weekends, our kids ride their scooters around. In our old neighborhood, we never liked the kids riding…”

Anna, who homeschools the children, says she’s excited about using Downtown Panama City’s rich history in her teaching and is encouraged by the practical ways in which Jimmy and Sarah are learning. “This year, they’ve learned a lot about video production! Jimmy (11) edits videos now. He’s started a vlog. Sarah (9) is constantly building and cooking.” Allan expands on their philosophy, saying, “If you look at children like a business—like what’s their competitive advantage in schooling—it’s not that they get more book learning, it’s that we shot a TV show!” According to Allan and Anna, several people in the community have had a hand in educating their kids, whether they know it or not. Anna leverages the environment in her teaching, too. “It’s been a year our kids won’t forget. Hands-on, real life schooling.”

Allan is very optimistic about the future of downtown but he and Anna don’t consider themselves to be pioneers. “My family’s owned property downtown for eighty years, so there is something sentimental to it—and I hope I can do something to help—but I didn’t build this house to change downtown.” It’s important to him that Downtown Panama City flourishes. “We’ve all had friends move away and I’m sick of it. This is my backyard. I’d love nothing more than to help spur people on to do things. And if no one’s going to, I will. Or I’ll help someone else do it.” As someone who has moved away, himself, and returned, Allan is clear on why he’s investing. “I’m not looking for an anchor. My parents live here and Panama City is a spectacularly beautiful place. I could live anywhere I want to, but I choose to live in this town. I could move to Austin and be a participant, or I can come here and create what I want to create. Here, I feel like Willy Wonka. Like, what do I want to do next?”

The outside of the house showcases a bevy of eye-catching features, including angular architecture, rooftop solar panels and a back porch
pergola made from a single log of 125-year-old sinker cypress.  Indoor features include a 48-square-foot granite countertop island, smart appliances, 19-foot ceilings, space-saving cabinets, corridor closets and taller-than-average bathroom counters for Allan–who is 6’4”. 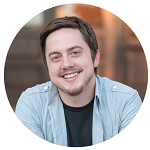